When did Racism Begin?

When did racism begin? By Scott Canipe

The racist ramblings of, billionaire, Donald Sterling that were stealthily recorded on audio in May 2014, by his ex-girlfriend have caused quite a stir regarding racial harmony in America. Sure he was set up and did not know that he was being recorded, but that is not the point. The point is that the man harbors racial sentiments against those that are not of his color or he would have never made those statements.

One month later, in June 2014, Janelle Ambrosia of Cheektowaga, NY, shockingly unleashed one of the most vicious diatribes as she hurled racist epithets to an African-American just because he started his car and the starting of the car spooked her children.

She knew that she was being recorded, but it did not deter her. With no shame, in a public setting and in front of her kids she screamed with vituperation, "you're a nasty f*****g n****r." Astonishing!

Why in a pluralistic society, such as the United States and other Democratic countries, do their citizens possess such racial hatred? Some are so vivid and open that it makes any decent human being’s blood curdle as witnessed above by Janelle Ambrosia.

Many of them organize and create hate groups with the intent to propagate a message of racial purity often times undermining morality and carrying out acts of violence. With such a global community that we live in, this does nothing but cause further complications in the advancement of all societies.

When did racism begin? The historical roots. 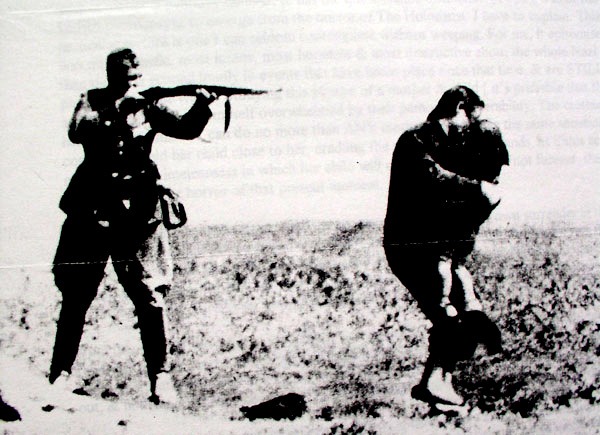 Nazi Soldier killing a Jewish Mother and Her Child

When did racism begin? Certainly, not in Contemporary times. Rather, this curse of humanity has existed before mankind came out of the cave. It has been mankind's ruthlessness toward his fellow brother and, sadly, a part of his civilization.

History has shown that there has not been one tribe or grouping of people that has not, at one time or another, been the object of racism or some form of opposition just because of its' ethnicity. The following depict some early records to answer "when did racism begin?":

Cuneiform - 3500 BC from Mesopotamia - Approximately 30% of earliest forms of writing called cuneiform, which dates back to 3500 BC depict slavery. Through millennia, racism and slavery have typically been intertwined. Sometimes they are inextricably bound in certain historical scenarios. However, one that is a racist may not necessarily believe that slavery is morally sound and vice versa. Be that as it may, one can find recordings and earmarks that illustrate both in early history.

Aristotle - 323 BC from Greece - the great Greek philosopher Aristotle stated that “Greeks are free by nature, barbarians (non-Greeks) are slaves by nature, and they are more willing to submit to a despotic government.” During this era (fifth through third century BC) there was a tremendous amount of intellectual illumination. Grecian philosophical power houses such as Socrates, Plato and Aristotle came from this particular time frame. Many of the Greeks held a belief that they were enlightened more than the rest of the world and as a result of such bias must and racism was the result.

Whenever God called Abram out of Ur of the Chaldees (An area located between the Tigris and Euphrates rivers), He made specific promises with Abram and his descendants. Abram’s name was later changed to Abraham and two of his sons were named  Isaac and the other Ishmael. It is believed that through Isaac came the Jewish race and through Ishmael came the Arab race.

Followers of Judaism and Evangelical Christianity believe that through the seed of Isaac came blessings and promises. In other words the Jewish people were specifically targeted and blessed above all other ethnicities. Many refer to them as God’s chosen people. The Messiah or Savior of the world is supposed to come through them. Christians feel that he came in the form of Jesus, while religious Jews are still waiting for the Messiah.

The Palestinians believe that due to Ishmael being the firstborn of Abraham that they have claim to the land of Israel. While the Jews claim that the land is there’s due to this particular covenant that God made with Abraham through his son Isaac This type of thinking has led to cataclysmic scenarios from a sociological cultural evolutionary standpoint:

These are just a few of the historical narratives that can be traced back to the interpretation of Genesis chapter 12:1-3, where an ethnic group (Jewish people) was shown favoritism and as a result of such has greatly impacted the advancement of civilization from 1900 BC until the present (June, 2014 AD).

Other examples of historical racism include:

No one is born a racist, rather one is molded into one by some considerations. There are viable reasons that make one racist. In the next article, the following are three reasons why people typically conduct themselves with a racist attitude.