What does Racism Mean?

What does racism mean? by Scott Canipe

From the previous article we know that racism has been around since civilization began. But why would one race place value over the other? To answer that we must first define "what does racism mean?"

In a nutshell, a good racism definition is to evaluate a person's merits or character with race being the primary determinant instead of focusing on the facts such as a person's history, rationale, actions, work ethic, or how they treat others. One should be judged by the content of their character and not the color of their skin.

No one is born a racist and there are viable reasons that make one racist. The following are three reasons as to why people typically conduct themselves with a racist attitude. United States history examples are given here, however the philosophies of each could be applied to other societal histories. This will further answer what does racism mean?: 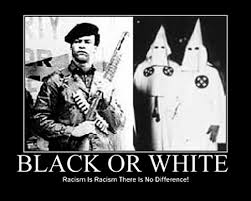 What does racism mean is explained.

Definition - Being born into racism

Further Elaboration - Children innocently have their values and beliefs instilled within them from their parents, friends and culture. Most of the time, after that, they sleepwalk through life as they grow into adolescence and eventually adulthood without being objective and examining their values, ideas and beliefs. They seldom challenge or question that which they were taught from infancy. This is why in certain areas of the world there will be a dominant religion or political ideology.

This is not always good because that which they were taught could be psychologically damaging, because some beliefs and values are toxic and will cause problems in the area of morality. Racism is a glaring representation of this.

A historical example of this regarding racism is the ramifications of events that took place from around 1865 until the present in the U. S.

Many whites in the South, prior to the Civil War, depended heavily upon African slaves to work the plantations for monetary purposes and control. In my opinion, not all of the southern plantation owners were necessarily racist, rather they were more of capitalistic opportunists. However, the freeing of the slaves and the resultant Reconstruction era fomented animosity and viciousness toward African-Americans in many white communities. Their previous way of livelihood was obliterated.

The offspring of these former slave owners were groomed from infancy to believe that white people were superior to black people, etc. Then came the Jim Crow laws and the many Supreme Court rulings including the Dred Scott decision to discriminate against African-Americans.  Unfortunately, that has continued and taught unto the present. However, this type of racism has subsided as a result of integration and through each succeeding generation.

Further Elaboration – Black Separatism. Black separatists (not to be confused with black nationalists) generally think that black people cannot advance in a society dominated by a white majority. A clear example of this are the movements of:

All of these movements believe in black separatism and many feel that those of Caucasian descent are evil or devils. Many believe that these devils are incorrigible and cannot be reformed.

These philosophies have originated more from a defensive measure resulting in the mal-treatment (Jim Crow laws, United States Supreme Court rulings, etc.) of African-American and their ancestors. According to these black separatist groups there should be no reconciliation or coexistence with white people. They, for the most part feel that blacks are superior to whites.

This way of thinking is exceedingly wrong! Because, these groups erroneously collectivize all white people in the same category as their ancestral lineage. One should not be blamed or held accountable for what his or her mother, grandfather, great-grandfather etc. has done.

Societies evolve over time, some toward advancement and some toward destruction. The United States, although problems still exist, is in a better moral position in the 21st century as opposed to the 20th century regarding race relations.

Many feel that institutionalized program such as: affirmative-action, entitlement programs and certain ideas of multiculturalism depict reactionary racism.

"We are not enemies, but friends. We must not be enemies. Though passion may have strained, it must not break our bonds of affection. The mystic chords of memory will swell when again touched, as surely they will be, by the better angels of our nature." - Abraham Lincoln