Knowledge of the three energy systems of the body will certainly help those that are concerned with being physically fit. This includes achieving muscle strength, muscle endurance, flexibility, high cardiovascular capacity, good balance, improving body composition, and increase reflex stability.

Anytime there are muscle contractions or even cellular activity in the body, energy is being acquired from some sort of a supply. This includes rigorous exercise, growth and repair of cells, thinking deeply, or simply blinking the eye.

The three energy systems are used to fuel all of these different mechanisms. Training and exercise stimulates and conditions each one of these necessary bodily mechanisms to achieve overall fitness and health. This is called "homeostasis."

Before I get into the three energy systems a question must be asked, "What is energy?" A simple definition of energy is the ability to do work or make change.

Once energy is consumed in the human body, it is stored and subsequently used in three different ways. Specific chemical reactions affect three energy systems that supply fuel to make the muscles and other bodily functions achieve their work.

For any truly serious student of fitness, it is important to know where this energy is stored and how it is released to the three metabolic pathways. 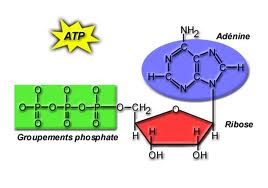 ATP, known as adenosine triphosphate, is a complex molecule that is made of three parts:

ATP is formed from the energy that has been released from the breakdown of food. It is produced in the mitochondria of the cells. The mitochondria are typically referred to as the “power plants” of the cells. ATP functions as the “reservoir” or “currency” of energy for the cells. It is not energy within itself however; it stores and releases energy much like a battery does.

ATP releases its energy whenever it is broken down into ADP. At this point, energy is transferred to specific functions that are needed in the body. This is how it happens:

Phosphorylation is what produces ATP. Since muscle cells constantly need ATP and ATP storage is very limited, the muscle cells must reproduce ATP, which can be accomplished via three energy systems:

These are the three energy systems. These systems are interconnected. They overlap each other in a phase like manner to provide a smooth transition from one energy system to another as exercise is being done. This allows the body to perform at its best through all levels of exercise intensity.

What are your thoughts on the three energy systems?

Your ideas, expertise and input are very important!

Do you have any comments or thoughts on the three energy systems of the body? Share it here!

Does your business need money?
Get pre-qualified here